The 7th Edition of the MINI ZIFF- The Festival of the Dhow Countries, will take place in both Dar es Salaam and Bagamoyo and is generously supported by ComNet, one of Tanzania’s fastest growing internet providers based in Dar es Salaam.

Frederick Shirima, Operations Director of ComNet explains their support of this event, “ComNet is proud to support the development of filmmaking in East Africa through sponsorship of this event. The Bongo Movie industry is becoming a major economic and cultural  force and we are excited to be able to celebrate the best of these movies – and share them with the people who love them. We are looking forward to partnering with the industry and roll out innovative ways of marketing the movies through streaming and online distribution as ComNet’s value added services”, explains Mr. Frederick.

During the past seven years, Mini ZIFF has supported the Swahili film industry and this year it will continue with its regional focus.  Festival Director Prof. Martin Mhando explains the vision for 2015, “This year we will focus on the distribution aspects of Bongo Movies throughout the region. We would like to hear from regional filmmakers and distributors about their own experiences in regards to the opportunities and challenges that the Bongo Movie industry is facing.”

As part of Mini ZIFF there will be a Bongo Movies Distribution Forum at the Escape One Venue in order to discuss and workshop these issues.  Mini ZIFF, along with Primetime Entertainment and Clouds FM, will also play host to 50 of the top Bongo movie stars, directors and technical star at an event where the ten Nominated Bongo movies will be announced. Bongo Movies top billing star Ray Kgosi will lead the discussion as he challenges the current status of the industry.

These ten movies will vie for the coveted Zuku Bongo Movies awards, including; Directing, Cinematography, Sound, Editing, Producing and Acting and TV.

Zuku is proud of their continued support of these awards, as Mandy Roger, Zuku TV Director explains, “As a channel, original content is paramount to our business. We harness the growth potential in developing Swahili films and awarding them the opportunity to be showcased on the Zuku platform –Zuku Swahili Movies Channel 210.” 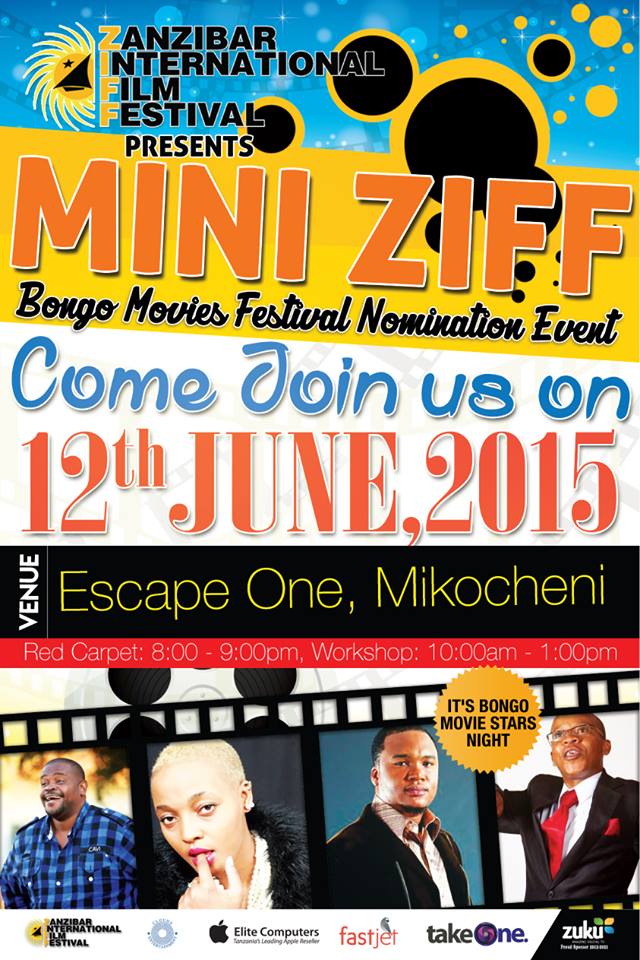 ZIFF is proud to have not only attained a solid reputation among world film festivals, but  also to be  considered one of the most significant cultural events in East and Central Africa.  The cultural focus of all ZIFF events will also be car

Thanks in large part  to the support from ComNet, Mini ZIFF 2015 will also include a Dhow Race on the foreshores of Bagamoyo Old Customs Beach on 6th June. This will be followed by another Dhow Race in Dar Es Salaam on 13th June. The winners of the Bagamoyo Dhow Race will join other masters at the ZIFF Dhow Race in Zanzibar on 19th July.

The Dhow Race has become symbolically linked to ZIFF and acknowledges the master craftsmen of old- makers of Dhows and Sails and those masters who sail them!

The Dhow race is a quintesential traditional sport of the coastal peoples of East Africa and this year the IT firm ComNet from Zanzibar has partnered ZIFF to re-invigorate this often fogotten sport as Prof Mhando explains, “Our festival is famous not only for its rich traditions, but also for its multicultural and friendly atmosphere that proclaims what Zanzibar is to the world”.

ZIFF’s theme in 2015 is Waves and Visions of Hope, which is most appropriate because we often draw strength from the experiences of others brought to us through ocean travel, reinforcing awareness of the shared histories of communities, nations and cultures.

Naming rights for the Awards at the Dhow race winners are open to corporates and sponsors. This sponsorship opportunity is a way for businesses and organisations to celebrate the masters of a trade that is the emblem of international communication, multiculturalism, peace and skills as well as Swahili culture.